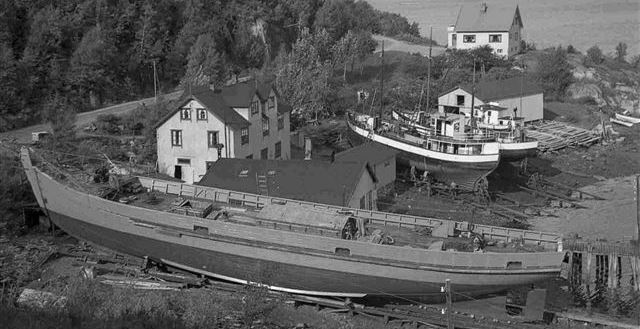 The company’s history dates back to 1918, when Frengen Slip and Motorverksted in Fevåg was established. In 1962, Jens Petter Bye bought the business and ten years later he moved it to Kvithyll in Rissa and established Fosen Mekaniske Verksteder AS, which quickly became a cornerstone company in the municipality, with several hundred employees. Ownership was later taken over by Bye’s daughter Anna-Synnøve Bye.

In 2008, the company was purchased by Bergen Group, which sold the shipyard on to Ukrainian Calexco in 2014. After the acquisition it was named Noryards Fosen, but soon ran into financial difficulties and had to file for bankruptcy the year after. A few weeks later, the new operating company Fosen Yard was established and could soon announce it had secured major conversions for five vessels in the Hurtigruten fleet.

In 2019 part of Nordseewerke GmbH joined Fosen Yard Group under the name Fosen Yard Emden GmbH, offering excellent new-building capabilities under cover, with eight production halls. Two large sea cages for offshore salmon farming were produced there, with dimensions of 80 x 22 m and weighing approx. 3600 tons. However, due to the impacts of COVID-19 and the lack of dry-docking facilities, securing new contracts became so challenging, that the operations were ceased in the summer of 2022.

On 1 July 2022 Fosen Yard leased a large part of Volkswerft in Stralsund, which will be operated under the name Fosen Yard Stralsund GmbH. This yard has outstanding facilities, with a new building hall of 300 x 108 m and one of the world’s largest ship lifts, with capacity of 25,000 tons and measuring 270 x 40 m. The intention is to build smaller luxury cruise vessels there, in addition to doing conversions on RoPax and yachts.

For many years, Fosen Yard’s main business was building new vessels, primarily smaller cargo ships, before entering the market for larger RoPax and passenger vessels in 1990. In 2007 Fosen Yard joined the offshore boom and for the next years built larger subsea construction and seismic vessels, in addition to two passenger ferries for Fjordline.

With the collapse of the offshore segment in 2014, this market vanished overnight, and Fosen Yard shifted focus to larger refurbishment and rebuilding jobs on passenger ferries. Fosen Yard was awarded the task of replacing the complete interior on altogether nine of Hurtigruten’s vessels and have in the recent years also rebuilt several vessels for the aquaculture sector.  Fosen Yard’s most famous project is “The World”, which was completed in March 2002 and is the largest private residential ship afloat.